A few years ago, we had the pleasure of attending a lecture by food historian and award winning author Peter G. Rose. She talked about America’s Dutch past and the influence of the Dutch settlers on today’s American food. She explained how the founders of New Netherland (currently the states of New York, Delaware, Connecticut and New Jersey) brought Dutch recipes, tools, herbs and fruit to the US. And she showed how the Dutch influence is still present in today’s food in the USA.

In her book History on Our Plate (2019) she writes in more detail about this topic, also by providing various food and drink recipes from New Netherland (1609 – 1664). The recipes are based on publications like Een Notabel Boecxken van Cokeryen (a Notable Little Book of Cookery, 1514) and the 13th century publication Le Viandier de Taillevent. The recipes include both the original and a modern version, allowing you to recreate food from the 17th century. Fried cod with mace, waffles, mushroom fricassee, artichokes with a bread, cinnamon and wine sauce: they all sound amazing.

In her introduction she describes the joy of baking bread in a hearth, the fun (and challenges) of preparing food in her home fireplace and the candlelight dinners that follow. When reading the well written recipes, you sense that she (and her husband who is in charge of the fire) aims to let her readers enjoy the cooking and eating as much as they did.

We were intrigued by a recipe for Mushroom Quiche without a Crust. It made us think of clafoutis. Replace the cherries by mushrooms, change the seasoning and you have a delicious vegetarian starter or main course. The recipe was first published in 1668 by Franciscus van Sterbeeck  in his book Tractaet van de Kampernoeljes, Genaamd Duivelsbrood (or Treatise of Mushrooms, named Devils’s Bread).
You’ll find a detailed recipe in History on Our Plate.

We enjoyed our Mushroom Quiche without a Crust (or should we say, Flaugnarde with Mushrooms?) with a glass of Rioja d’Oliva Gran Reserva, Altos d’Oliva, 2013. A full bodied, red wine with lots of character that worked really well with the mushrooms, the oregano, and the Gouda cheese.

History on Our Plate is available via the well-known channels and your local bookstore for approximately 15 euro or 10 US$.

Maastricht is one of the Netherlands most beautiful cities. It’s located in the very south of the country, on both sides of the river Maas. It’s close to Germany (Aachen, Aix-La-Chapelle is only 30 km) and the Belgian city of Liège (25 km). Its culture and cuisine are strongly influenced by France. Maastricht is well known for its excellent local wines (Hoeve Nekum, Apostelhoeve), the hilly countryside and its ceramic.

In 1737 Marie Michon was born in Maastricht. In 1768 she married Albert de Milly. Both families were related to Hugenoten: protestant people who escaped from persecution in France because of their religion and moved (in this case) to the Netherlands in 1685. One of her daughters was Thérèse Elisabeth de Milly, who married the German Baron Friedrich Ludwich Behr in 1792. Clearly a rich and influential family. Mother and daughter wrote down recipes and practical households tips. There are two ‘cahiers’, known under the title ‘Natuurlijk Kookboek van Beproefde en Ondervonden Echte Recepten voor een Zindelijk Huijshouden’. The title would translate into something like ‘Natural Cookbook of Tried-and-Tested Real Recipes for a Proper and Clean Household’. In 2008 44 recipes were included in a book written by Marleen Willebrands.

In the Historisch Kookboek Vega written by Manon Henzen we noticed a recipe for chervil (pan-) cakes, based on one of the recipes of Marie Michon and Thérèse Elisabeth de Milly. Chervil, although its taste is delicate, was considered to be a very powerful and useful herb. It relieved symptoms of gout, high blood pressure, gas, eczema etcetera. The original recipe suggest frying the pancakes per 3. Which made us think of the traditional Dutch dish ‘drie in de pan’. These are small pancakes made with flour, yeast, eggs, milk and (optional) raisins. Fried per three, indeed.

The dough of the chervil pancakes is a combination of eggs, all-purpose flour, bread crumbs, melted butter, yeast, sugar and cinnamon. Add lots of chopped chervil, allow to rest and fry in a pan. We also added chopped parsley and chives.
The pancakes looked very nice and inviting. When eating them we were slightly disappointed (a bit heavy, a bit dry). Perhaps we should have thought about a sauce?

More information (Dutch only) about the original recipes from 1785 can be found on the website of DBNL.

Next year on February 11th and 12th, the 7th Amsterdam Symposium on the History of Food will take place in Amsterdam. You can also join online, for € 40,00 only. Lunch not included of course. This year’s theme is Food and the Environment: The Dynamic Relationship Between Food Practices and Nature.

The key note will be delivered by Ewout Frankema, Professor of Rural and Environmental History at the Dutch Wageningen University and research fellow of the UK Centre for Economic Policy Research (CEPR). Amongst the speaker are Christian Reynolds on The evolution of “sustainable” and vegetarian recipes from manuscripts and cookbooks to online and Amber Striekwold on The Dutch Alternative Food Movement.

Additional information and the registration form are available on the website of the symposium.

For most of us cooking is something we do on a more or less daily basis. We cook rice, fry meat, prepare a salad and when we want to make something special, for instance Tournedos Rossini or Pêche Melba, we follow a recipe.

For a few people cooking is about combining flavours, colours, textures and temperatures. Cooking is all about creativity; cooking has become an Art. Chefs invent dishes and utensils, they set the standard for regional cuisines and they guide us. Their artefacts are dishes and recipes; their art is Culinary Art.

Unfortunately there are not many musea dedicated to the Culinary Arts: in Napa, California (the The Culinary Institute of America), in Marrakesh (Museum of Moroccan Culinary Art) and in the beautiful French village of Villeneuve-Loubet: the Escoffier Museum of Culinary Arts. It is housed in an authentic Provençal style home from the 18th century: the birthplace of famous chef Auguste Escoffier.

The Escoffier Museum was founded in 1966 and is home to an intriguing collection, ranging from a Provençal kitchen (with a grill in front of an open fire), a predecessor of the mandoline (invented by Escoffier), a room with the most amazing sculptures made from sugar and chocolate, a room with Escoffier’s desk and a library with over 3000 books, a video room, a room with over 300 menus and a room dedicated to other great chefs.

The museum owns a very nice portrait of Antonin Carême and a picture of Eugénie Brazier (1895 – 1977), also known as Mère Brazier. She was one of the ‘mothers’ in Lyon and she brought local cooking to the level of Gastronomy. She founded her first restaurant Mère Brazier in 1921 at the age of 26. She was the first to be awarded 6 Michelin stars for two restaurants. She truly is the founder of the regional Cuisine Lyonnaise. Indeed, the cuisine made famous by Paul Bocuse.
Antonin Carême (1784 – 1833) was very likely the first modern chef, an influential author and inspiration to chefs. He introduced the toque, he was a dear friend of Gioachino Rossini and very likely the creator of the tournedos Rossini. He started his career as patissier and became chef to Napoleon, the later George IV and Tsar Alexander I.
And of course Auguste Escoffier (1846 – 1935), chef in Paris, Monte Carlo and London. Together with César Ritz he created the luxury hospitality trade. He introduced behavioural and organisational standards in the kitchen. He stressed the importance of personal hygiene of kitchen staff and encouraged the further education of his employees. He developed the brigade system with party leaders and designed kitchen utensils. He introduced fixed price menus and developed Bouillon Kub with Julius Maggi. But above all he created many beautiful dishes and was chef to the rich, the famous and to royalty. And he was an author, of course, most notable of the Guide Culinaire (1903).
In 1910 (when working in London) he published about a project to extinct pauperism in the UK. Two years later he organised the first fundraising dinners to support charitable causes. His social interests went far beyond the rich and the famous. 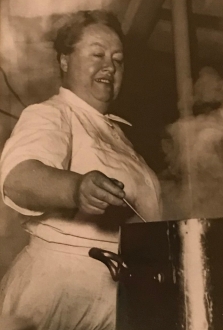 The menus make you think about all these no doubt wonderful dishes, about the richness of the dinners and lunches, the extravagance of the food and wine served. Wouldn’t it be interesting to taste some of it? A slice of Filet de Boeuf a la Chartreuse? A piece of the Gateau Soufflot? The real artefacts of Culinary Art can be found in restaurants. Which creates an interesting dilemma. Pêche Melba was created by Auguste Escoffier for the famous opera singer Nellie Melba in 1893. The final recipe is a combination of peaches, vanilla ice cream and raspberries. Where can we taste Pêche Melba as if made by the great chef himself? Many restaurants offer Pêche Melba with additions such as whipped cream, mint, dried almonds or replacements such as strawberries and canned peaches. Very much not what Escoffier intended. So we can read the original recipe as written by Escoffier (on display and sale in the museum) but where to taste the real Pêche Melba?

Fortunately the museum offers a free tasting of Pêche Melba to all visitors between June and September. Indeed, depending on the availability of fresh, ripe, juicy peaches.

This week on Friday and Saturday the annual Amsterdam Symposium on the History of Food took place at the main auditorium of the University of Amsterdam. Such a pleasure to listen to great papers presented, discussing the origin of umani or the history of Byzantine taste (presented by Anouk Everts). The key-note was delivered by Peter Klosse. He made many interesting points with regard to taste and flavour. His analysis of Mouth Feel is food for thought and discussion.
PS Garum as used in the Byzantine kitchen is a fish sauce. It is made from fermented fish (sardines for instance) and salt. It goes back to Roman times. Fun to make, actually….

Yotam Ottolenghi received the prestigious Johannes van Dam prize. The jury, chaired by professor Louise O. Fresco, mentioned Yotam’s impressive contribution to current Dutch and International cuisine. The prize is named after culinary writer and critic Johannes van Dam who was not only known for his reviews of restaurant but also for his massive collection of books on food and drinks. Mr. Ottolenghi was very pleased to receive the prize (as you can see in the picture!)

Antwerpen a la carte was the winner in the Academic category, the Joop Witteveen Prize. A book that discusses not only the history of food in the port city of Antwerpen, but also today’s role of a (hungry) city in the area of food production and consumption. Main authors are Ilja van Damme and Leen Beyers. The book is linked to an exposition at the MAS in Antwerp.
More information about the papers can be found on the website of the conference.